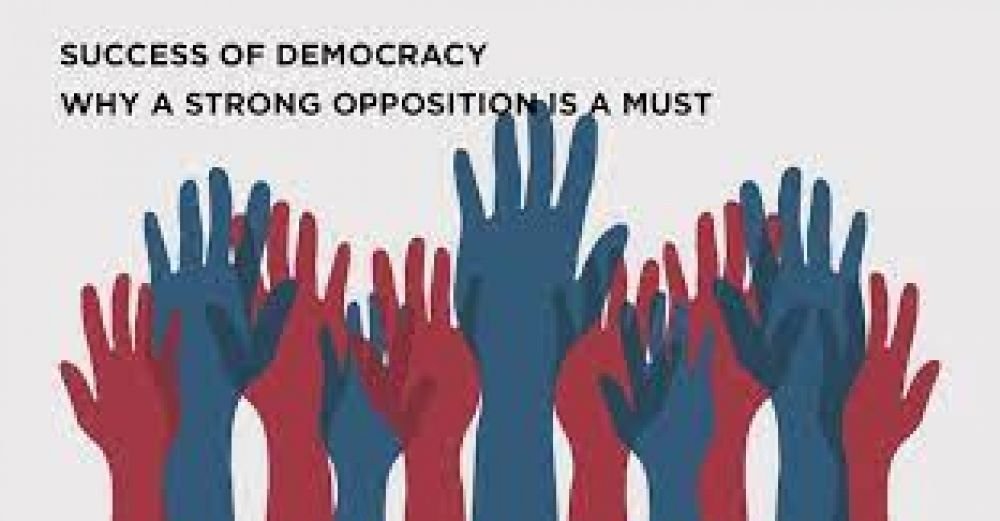 A STRONG OPPOSITION IS MORE IMPORTANT THAN A GOOD GOVERNMENT

A STRONG OPPOSITION IS MORE IMPORTANT THAN A GOOD GOVERNMENT

This debate we're having today in 2021 is similar to the one we had in the 1970s.
The country, the people, the two political parties in the frame ,everything remains the same. Except this time, the tables have turned and the Congress is in the opposition.  The dynamics of politics are just as whimsical as those of life. Who knows what's next?
I would like to bring this to everyone’s attention that whenever I use the term “opposition”, I’m referring to a strong and influential one that can have an actual impact on the government and its policies for the sake of the citizens.

A good government is, to speak objectively, a highly subjective term.
More often than not, governments that are considered good, would in fact be creating a sense of false consciousness in the people -while the actual policies of the chair may be subversive.

Now here comes the opposition in the frame- like a knight in a shining armour: it can make valid points to decapitate the monstrosities and unfairness of the ruling party.
We can illustrate this point by citing the example of China and like a damsel in distress, shackled by the chains of brutal communist government ,it needs an opposition now more than ever.

The need for opposition is constant for every government ,especially a democratic one, that will ever exist in our society because democracy without true opposition is perhaps just a disguised dictatorship.

Not to forget that it is the opposition that works like insurance, even a protective cushion, one might say, in case the present government is dissolved due to no confidence, resignations or any other valid reason.
It has the power to prevent, to restrain, to repair evils within the council, without which all kinds of mischief and distempers will break in upon a state.

Sooner or later it is sure to be next in power as can be seen across the world due to people's tendencies to experiment in a democracy.
So power alternatives are immensely significant in a democracy to make sure that people in power know that they can be dethroned .
It is the opposition that entitles the govt to the allegiance and service of the people while also making sure it does not offtrack , otherwise a govt that started with a quest to serve the people can, surely intoxicated by power, influence and wealth, be led to
a state where dystopia is just a corner away.

As people battle with the deadly Coronavirus, the world is sleep walking into an authoritarian future to keep capitalism alive with the help of brute force. The parliamentary and presidential forms of democracies are running without effective opposition. The majoritarian governments in USA, UK, Brazil, India, China, Pakistan, Bangladesh and many other countries are busy in bending inclusive, secular and progressive rules and regulations to please global capital at the cost of people and their lives

It has been historically seen that absence of a strong political and legal opposition has resulted in brutal uprisings in countries like Russia,France and Germany.
Even mythology teaches us lessons of the importance of a strong opposition.
Had Dhritarashtra been opposed in his unfair ways and treatment of the pandavas, the world could have been spared of a war so disastrous it covered the holy grounds of Kurukshetra red with blood.

Wherever there is a government without a strong legal and political opposition, untold hardships are suffered by the citizens, in terms of inhumane treatment and  bitter handling of the economy, blended with violation of rights and alarmingly high crime rates.
Some recent examples being China and North Korea.
While these names come to our mind, to be fair every society has at least once been the victim of such injustice and brutality.

In Abraham Lincoln's words: democracy is a government of the people for the people and by the people.
A strong opposition puts that principle into practice by making sure the voice of the
people is being heard and represented politically, socially and legally.

Opposition all in all is a gem we cannot dismiss.
It is the boundary, the measure between the government’s prerogative and the people’ liberty.

Tomorrow is uncertain ,yes, but if there’s something without which the existence of a harmonious political system is impossible, it would, undoubtedly, be a strong opposition to the rule , because the greater the power, the more dangerous the abuse, and as proven always, people with power will continue to take advantage of those without it.